Ubsdell, R.H.C, 1839, The Southampton Monument, Collection of Prints & Drawings of the Society of Antiquaries of London. Sepulchral Monument and Tombs, Hampshire

©The Society of Antiquaries of London/SAL/238A/5r-v 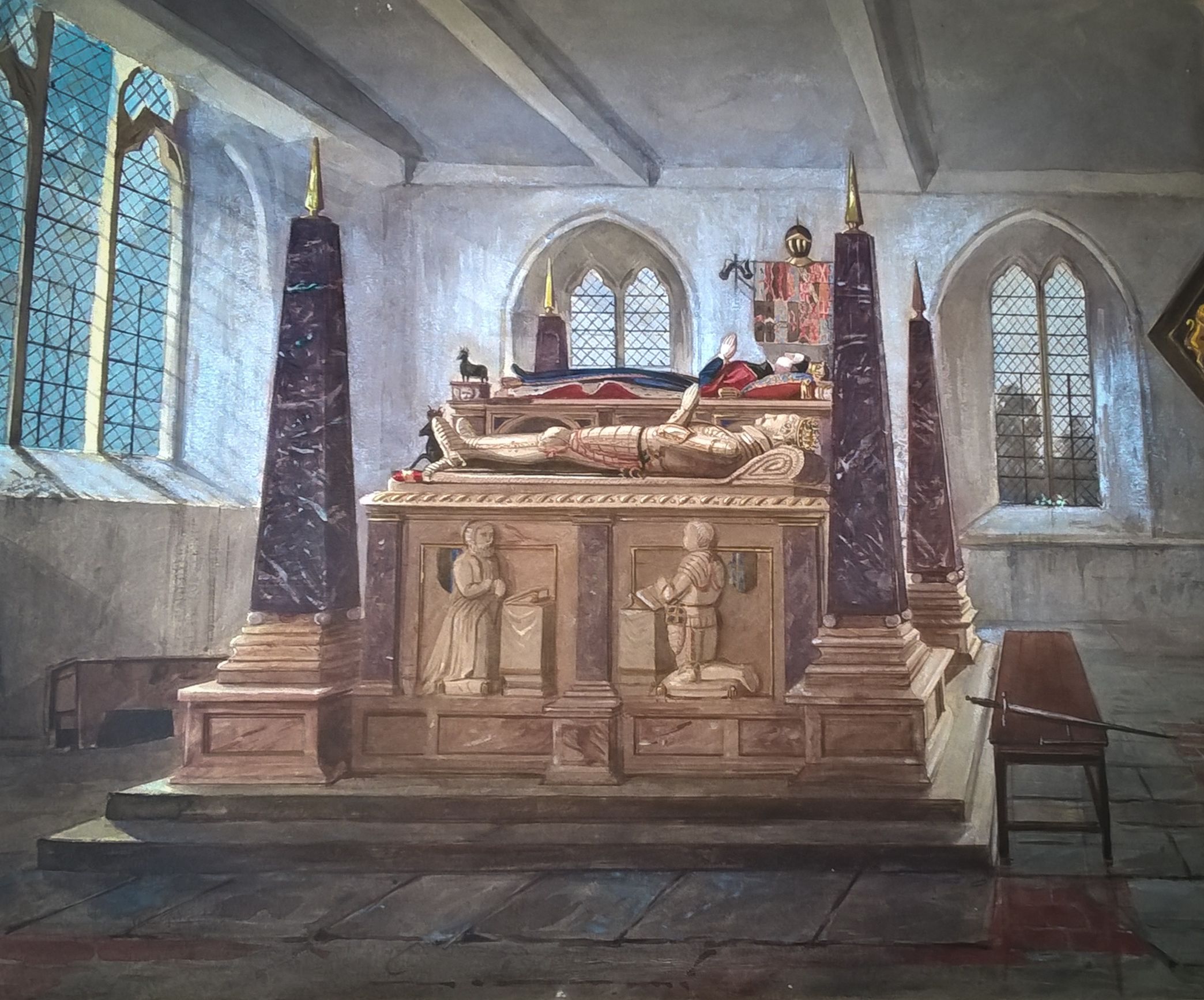 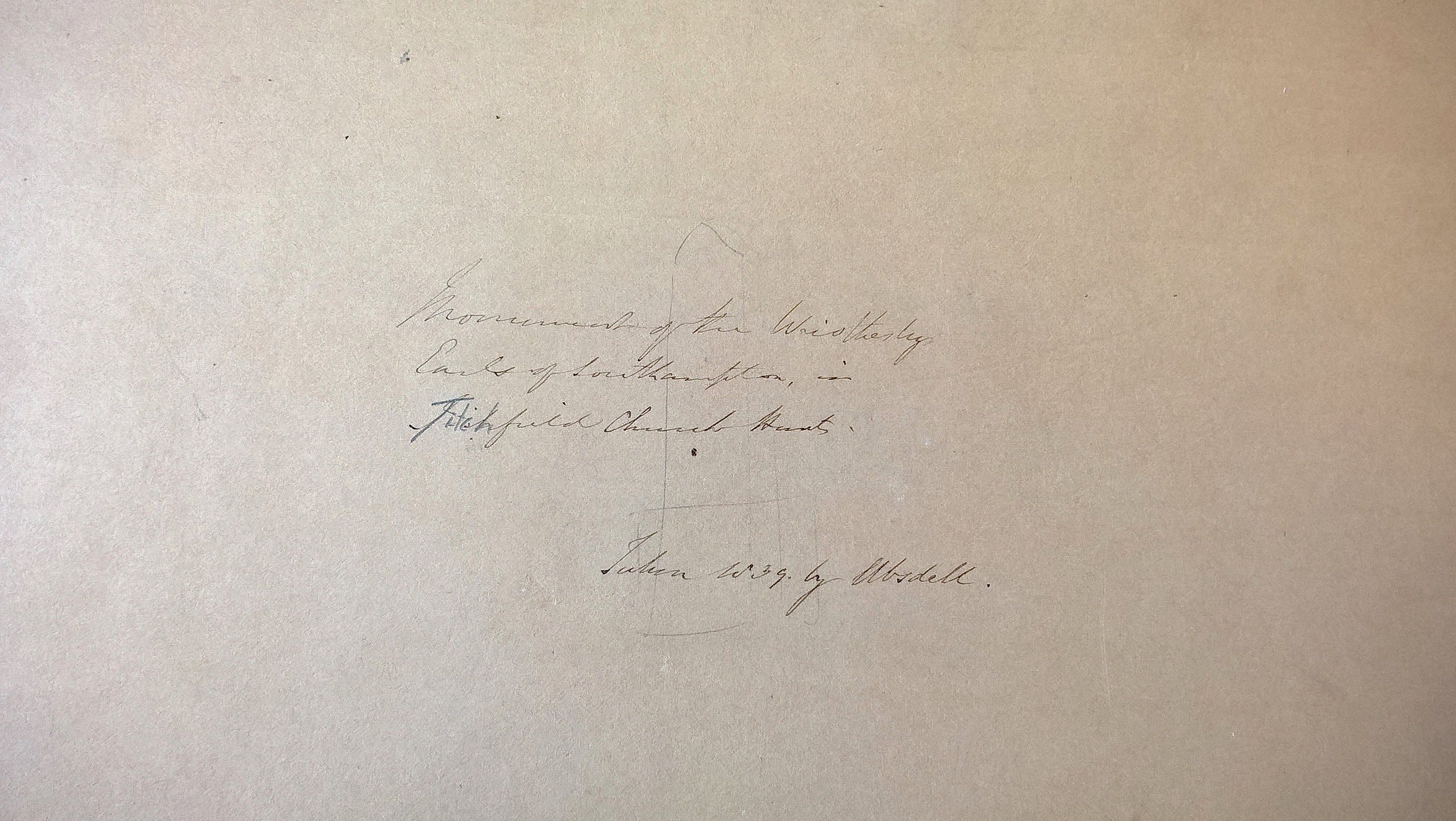 The Society of Antiquaries of London Terms of Use

The Society of Antiquaries of London

The Society of Antiquaries of London is the oldest independent learned society in Britain concerned with the study of the past. For 300 years its library and museum collections have been at the Society's heart, helping to shape our understanding of the past.

The Library is the largest antiquarian library in the country, with an outstanding collection of more than 130,000 books dating from the fifteenth century to the present day, holdings of historic journals and over 600 current subscriptions, manuscripts and archives, and prints and drawings.

It covers British and European archaeology, architectural history, art history and the decorative arts (especially medieval), the historic environment, and British local history. The Library is freely available for research.

The three vibrant of the Wriothesley/Southampton Monuments, featured throughout the SSLT/SORR website, were painted by R.H.C. Ubsdell. Together they provide important testimony from 1839-40 of the Southampton Chapel and the two Wriothesley memorials prior to their 20th-century restorations. Thought lost, they were recently re-discovered in the archive of the Society of Antiquaries of London.

The current Lord Montagu is leading an appeal to restore these monuments and would be grateful to receive any information, early drawings or photographs of the monuments and any information regarding the whereabouts of the two missing angels described, and depicted flanking the recumbent Lady Mary Wriothesley Monument, in 1719 and 1840. R.H.C. Ubsdell created a beautiful of the Lady Mary Monument in 1840, complete with the two, now missing, Angels. On the back he provided this description: “The figures are much defaced, and only one hand remains, which appears to have held a palm branch. The figure above the monument probably held a trumpet. The figures of the Angels measure 25 inches in height.”

Richard Henry Clements Ubsdell rose from poverty to prosperity and social standing by his skill as an artist and talent as a businessman.

He was born in  in which his father was a waiter.  He and his younger brother Daniel became portrait painters, in miniatures; tiny on ivory which had their heyday before photography.

Richard married Mary Ann Pennal in  when she was 19.  They had four children by 1839.

To support his growing family Ubsdell took every opportunity to build his reputation as an artist, for example by lecturing on art to the Literary & Philosophical Society and, by introduction, making contact with the rich and titled members of the Royal Yacht Squadron on the Isle of Wight.

He painted beautiful of items recovered from the Mary Rose.  Between 1840 and 1846 he walked the length and breadth of Hampshire seeking portraiture work.

As a by-product he painted over 100 of the Hampshire Churches he passed on his travels. These he sold to the Bishop of Winchester and Sir Frederic Madden.

The council paid him to create illuminated addresses on vellum for visiting dignitaries. In painting miniatures, and collecting images of people for a series of paintings of gatherings at significant events, he painted many famous people, including  Jane Austen’s sailor brothers and Jane’s niece Anna Lefroy. He also painted the Courts of Queen Victoria and Louis Philippe of France. His miniature of Anna Lefroy captures Anna in the pose of a writer, Anna having recently inherited the manuscript of ‘Sanditon’ (Jane’s last unfinished novel) and in the process of writing her continuation.

Many of Ubsdell’s images were subsequently used by more famous artists, lithographers, and the publishers of the illustrated London newspapers.

By 1857 Ubsdell was an early photographer, and with his two sons created a library of local landmarks as stereoscopic images on glass slides. (Most probably these would have been sold to the London Stereoscopic Company who were rapidly expanding their of images.)

In 1859 he moved from his small studio in Portsmouth High Street to an impressive art and photographic studio and gallery overlooking Governor’s Green in Portsmouth.  Here he made his fortune in the craze for photographic visiting cards known as Carte-de-Visite.

By the late 1860s, Ubsdell had become the paramount artist in Portsmouth and its hinterland. Life then became a matter of personal . He started an ascent through the various ranks of the Freemasons and in 1870 was elected a borough , where amongst other things he sat on the Sanitary Authority who were at the time constructing and improving Portsmouth’s sewers.

Sadly, his wife and children all died before him, his daughter Lavinia not yet two.  He himself died of cancer of the tongue aged 75, perhaps caused by bringing brushes to a point in his mouth.

Ubsdell is represented by pictures in the Royal Collection, The National Maritime Museum, The National Portrait Gallery, Winchester Cathedral Library, Portsmouth Museums & Record Service, Chawton Cottage & The National Trust Property Uppark, Society of Antiquaries of London, as well as in many private collections yet to be discovered!

One good turn deserves another!

Henry Wriothesley was Shakespeare's sole dedicatee and purported patron, making possible some of the greatest plays and poems ever penned. Join Lord Montagu in paying it forward in service to the
living record of their memory.