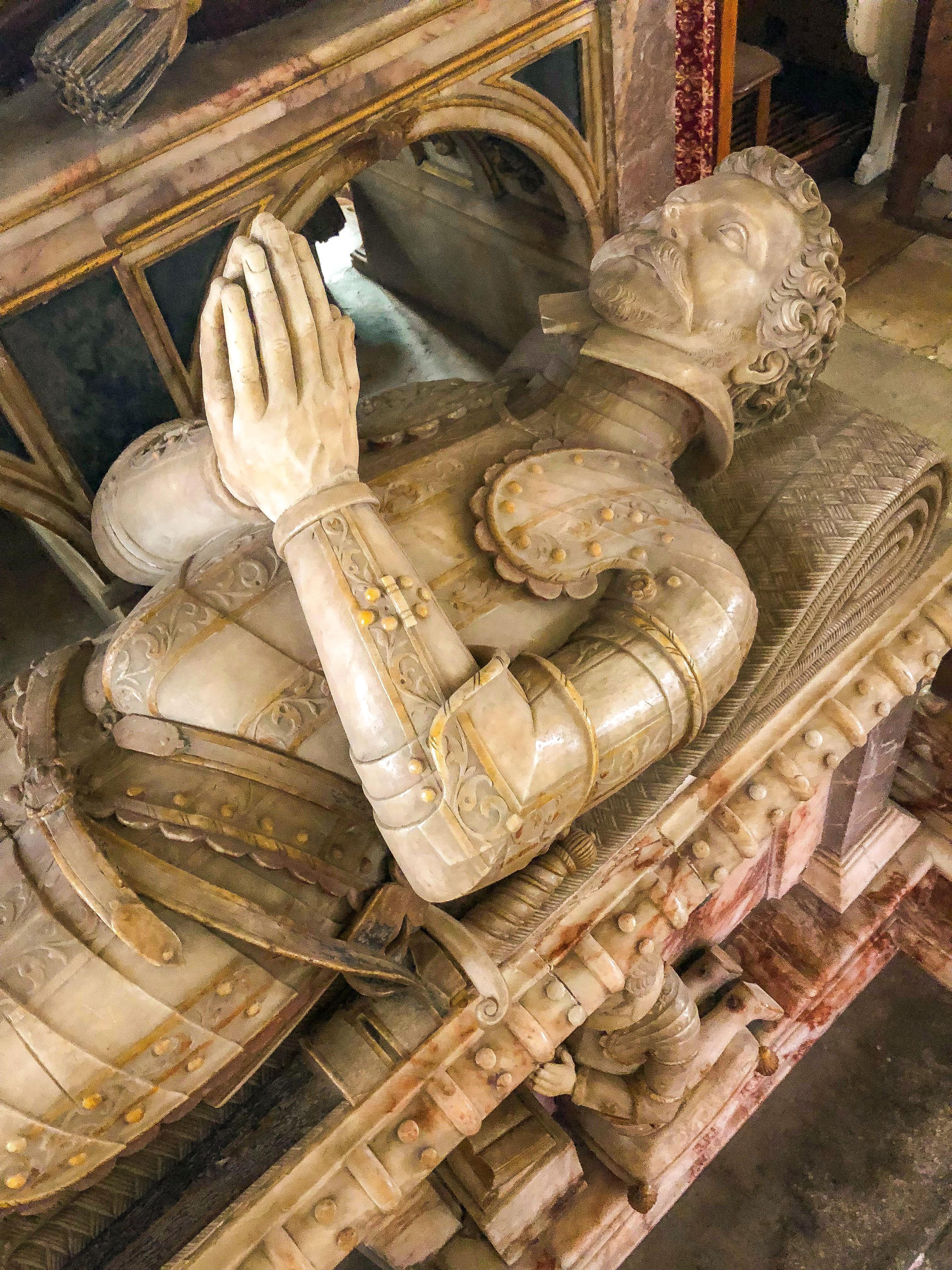 Reproduced with permission of the Licensor through PLSclear.
Published in print: 23 September 2004

Visitors may consult content provided by Oxford Publishing Limited for research and study purposes only. Any further use, including, but not limited to, unauthorized downloading or distribution of images or editorial content is strictly prohibited. Visitors must contact the Oxford Publishing Limited (facilitated by PLSclear) at  plsclear@pls.org.uk.


Wriothesley, Henry, Second Earl of Southampton (bap. 1545, d. 1581), magnate, was baptized on 24 April 1545 at St Andrew's, Holborn, the third and only surviving son of Thomas Wriothesley, first earl of Southampton and first Baron Wriothesley (1505–1550), lord chancellor, and his wife, Jane (d. 1574), daughter and heir of William Cheney of Chesham Bois, Buckinghamshire, and his wife, Emma. Henry Wriothesley's godparents were Henry VIII, Princess Mary, Charles Brandon, first duke of Suffolk, and Henry Fitzalan, twelfth earl of Arundel. Thomas Wriothesley was elevated to a barony on 1 January 1544, was lord chancellor from 1544 to 1547, and was promoted to the earldom of Southampton on 16 February 1547; but he fell from power and was dismissed from office on 6 March 1547. Despite his disgrace, Southampton was one of the greatest noblemen in Hampshire, with an annual landed income of at least £1466 13s. 4d. in the late 1540s. He died on 30 July 1550, when his heir was still a minor. His widow's dower was £466 13s. 4d.

The wardship of the second earl of Southampton was granted to William Herbert, first earl of Pembroke, on 14 December 1550. Southampton remained with his mother and was privately educated and brought up a Catholic. Little is known about his youth or education but he was certainly taught . His wardship passed to Sir William More of Loseley, Surrey, in 1560. Southampton married into one of the leading Catholic families of Sussex. His wife was Mary (b. in or before 1552, d. 1607), daughter of Anthony Browne, first Viscount Montagu (1528–1592), and his first wife, Jane; the marriage took place at Montagu House in London on 19 February 1566. The couple had one son Henry Wriothesley, third earl of Southampton (1573–1624), the courtier and patron of Shakespeare, and two daughters, Jane, who died before 1573, and Mary (c.1567–1607). Southampton was admitted to Lincoln's Inn on 19 March 1566. He entertained Elizabeth I at Titchfield Place, Hampshire, in 1569 and probably spent most of his time looking after his six residences and managing his estates. His landed income was between £2000 and £3000 in the 1560s and he lived in a grand way, maintaining a large and lavish household.

Southampton was arrested on 18 June 1570 for intriguing with the Spanish ambassador, Guerau de Spes, and for suspected complicity in the contemplated marriage of Thomas Howard, fourth duke of Norfolk, to Mary,  of Scots. He was placed under house arrest with More at Loseley from July to November 1570. Examined on 31 October 1571 for suspicion of having consulted with John Leslie, bishop-elect of Ross, as to whether he might conscientiously obey Elizabeth after the bull of excommunication, Regnans in , Southampton denied the  but was confined to the Tower of London until 1 May 1573. During his  he was allowed to visit his  and to spend time at Montagu's seat at Cowdray Park, Sussex. Back in , Southampton was appointed JP for Hampshire on 12 July 1574. The dowager countess died on 15 September. The earl and countess of Southampton did not live in complete marital harmony, and their divisions caused a falling out between Montagu and his son-in-law. The countess, who was ‘put away, suspected of ’ (Miscellanea, 2.183), loyally made excuses for her husband to her father, who was angry that Southampton had ‘barred [her] his bord and presence’ (GEC, Peerage, 12/1.127, n. c). Southampton expressly stated in his will of 29 June 1581 that his daughter should be brought up by either his sister, Katherine  or his aunt, Lawrence, insisting that she ‘be not in  with her Mother’ (TNA: PRO, PROB 11/65, sig. 45). He died on 4 October 1581 at Itchel in the parish of Crondall, Hampshire, aged thirty-six, and was buried on 30 November at Titchfield, after a lavish funeral, costing over £138. Southampton also ordered that up to £1000 be spent to create a monument there for his parents and himself out of alabaster, known as the Titchfield monument. His  proved on 7 February 1583, provides ample evidence of his Catholic friendships and religious convictions. He did not make specific provisions for his widow, only that she should not try to possess Dogmersfield, Hampshire, which was to be allotted to his heir, who inherited lands worth £1097 6s. per annum. The dowager countess married twice after his death: her second husband was Sir Thomas Heneage and her third Sir William Hervey. Her will, dated 22 April 1607 and proved on 14 November, instructed that she be buried with Southampton at Titchfield.

Henry Wriothesley, Second Earl of Southampton (1545–1581), only surviving son of the first earl, was christened on 24 April 1545 ‘at St. Andrewes in Holborne with great , the kinges Majestie godfather; the Erle of Essex deputy for the ; the Duke of Suffolke the other godfather; my Lady Mary godmother at the ; and the of Arundel godfather at the ’ (WRIOTHESLEY, Chron. i. 154). He was styled Baron Wriothesley from 1547 until 30 July 1550, when he succeeded as second Earl of Southampton. In August 1552 Edward VI was entertained at Titchfield, and in 1560 the council entrusted the earl, ‘as a ward of ,’ to the care of William More of Loseley Park, near Guildford (Hist. MSS. Comm. 7th Rep. App. p. 615). Southampton, who was privately educated, inclined to the Roman religion, and married into a Roman family. His wife was Mary, daughter of Anthony Browne, first viscount Montague [q.v. and the marriage took place on 19 Feb. 1565–6, when Southampton was still , at Montague's house, ‘by without the consent of my lady mother.’ In 1569 he entertained Queen Elizabeth at Titchfield, but his Roman sympathies had already involved him in the scheme for marrying Mary Queen of Scots to the Duke of Norfolk. This was not the limit of his disloyalty; for on 1 Dec. 1569 the Spanish ambassador wrote to Alva, ‘Lord Montague and the Earl of Southampton have sent to ask me for advice as to whether they should take up arms or go over to your excellency’ (Cal. Simancas MSS. 1568–71, p. 214; FROUDE, ix. 135, 144). On the 18th he reported that the two lords actually started for Flanders, but were driven back by contrary winds. Southampton was arrested on 16 June 1570, and placed in the custody of (Sir) William More of Loseley, his former guardian (Acts P. C. 1558–70, p. 366; Hist. MSS. Comm. 7th Rep. App. pp. 622–6; KEMPE, Loseley MSS. passim; ‘The Confinement of the Earl of Southampton,’ apud Archæologia, xix. 263–9). According to Guerau de the earl was ‘again’ arrested in October 1571, ‘having come unsuspiciously to court.’ He was reported to be one of those ‘with whom Ridolfi most , and upon whom he put most trust,’ and, according to the bishop of Ross, Southampton consulted him as to whether he might conscientiously obey Queen Elizabeth after the bull of excommunication. He was examined on 31 Oct. 1571 and denied the truth of these accusations (, Burghley State Papers, pp. 38, 40; Cal. State Papers, Scottish, ed. Thorp, ii. 889, 890; Cal. Hatfield MSS. i. 526–7, 558, 560–2). He is said (Archæol. xix. 267) to have remained at Loseley till July 1573, but it appears that after this examination he was really confined in the Tower. On 30 March 1573 his father-in-law was allowed to confer with him ‘touching matters of law and the use of his living in the lieutenant [of the Tower]'s presence.’ On 1 May following he was allowed ‘more liberty,’ and on 14 July was permitted to ‘remain with the Lord Viscount Montague’ at Cowdray, near Midhurst, Sussex. His dispute with the lieutenant of the Tower about his diets was settled by arbitration, and on 12 July he was placed on the commission of the peace for Hampshire (Acts P. C. 1571–5, pp. 92, 102, 109, 111, 130, 267). He was also a commissioner for the transport of grain (ib. 1577–8, p. 368), commissioner of musters, and to suppress piracy. Two months before his death he was suspected of Edmund Campion [q.v. on 20 Dec. 1581 his house in Holborn was searched by order of the council (ib. 1581–2, pp. 153, 296, 298, 376).

Southampton died, in his thirty-seventh year, on 4 Oct. 1581, and was buried in Titchfield church, where his monument is still extant. His portrait, painted by Lucas van Heere, now at Bridgewater House, is reproduced in Lee's ‘Life of Shakespeare,’ (illustrated edit. 1899); with the inaccuracy common at the time it is inscribed ‘ætatis 19, 1566.’ By his wife, whose portrait is at Welbeck, Southampton had a son, who died young; his son and successor, Henry Wriothesley, third Earl of Southampton [q.v.] ; and a daughter Mary, who in 1585 married in her mother's private chapel in St. Andrew's, Holborn, Thomas Arundell, afterwards first Arundell of Wardour; the marriage license, dated 18 June 1585, was issued to the bridegroom's father, Sir Matthew Arundell (Bishop of London's Marr. Licences, Harl. Soc. 1520–1610, p. 140). His will, dated 29 June 1581, was proved in 1583. His widow married, as her second husband, Sir Thomas Heneage [q.v. and as her third, in May 1598, Sir William ( ) Hervey of Kidbrooke [q.v. She died in and was buried at Titchfield, her will, dated 22 April, being proved on 4 Nov. 1607. Autograph letters from Southampton to Burghley and the lords of the council desiring his release are extant in Lansdowne MSS. 16, arts. 22 and 23, and 17, art. 14.

Entry by Park Honan
Copyright © Oxford Publishing Limited 2019
Reproduced with permission of the Licensor through PLSclear.